Lawyer Ready to Settle in After Good Rookie Year 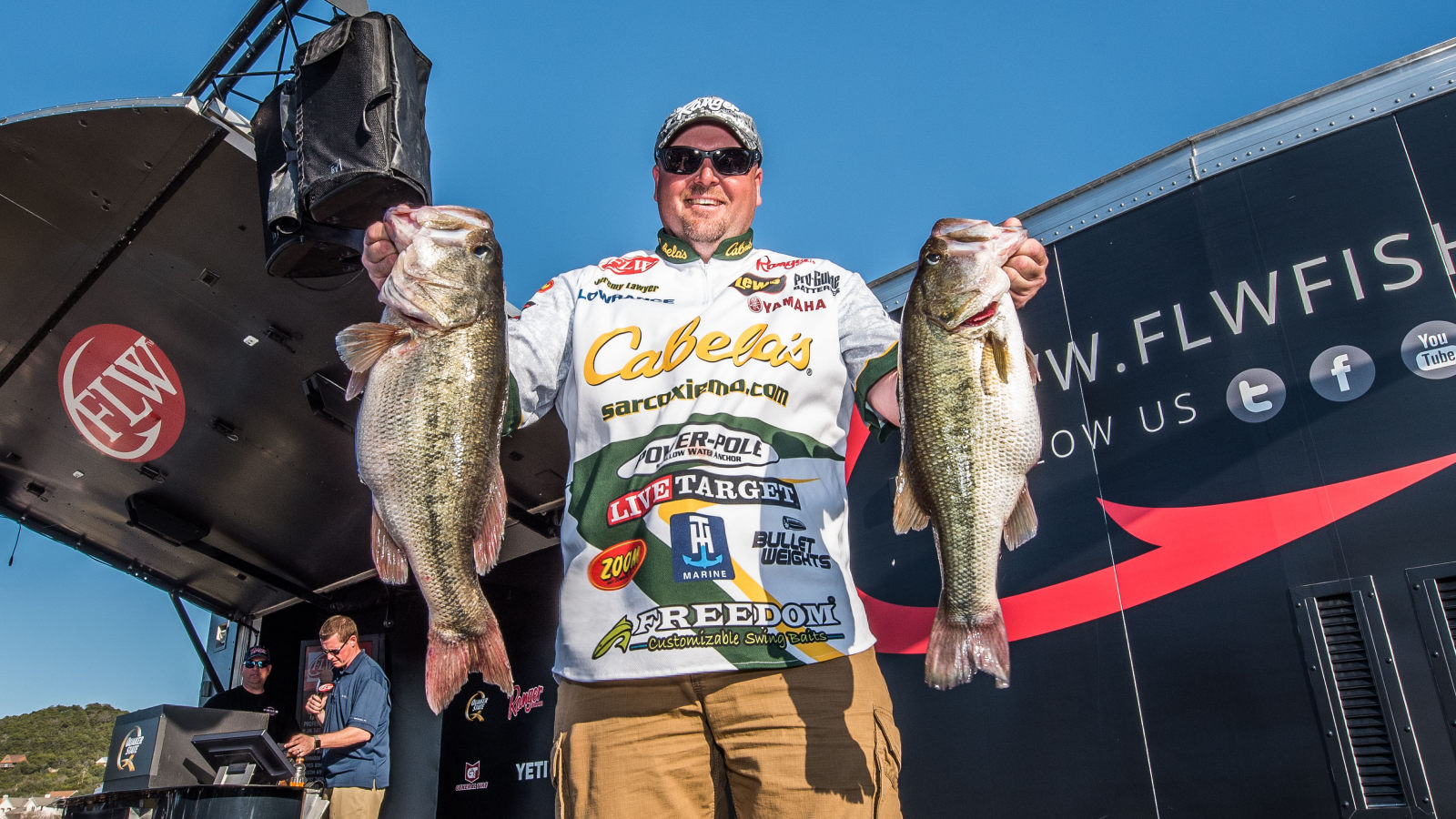 Jeremy Lawyer likened being a rookie on the FLW Tour to being thrown into a shark tank.

Lucky for him, though, he didn’t get chewed up.

The Sarcoxie, Mo., native held his own throughout the 2017 season, bouncing back from disappointing finishes on several occasions to finish 28th in Angler of the Year points and 3rd among rookies behind Bradley Dortch and Justin Atkins. He shook off a 138th-place finish at Beaver Lake in April and logged top-50s in the last two events to qualify for his second Forrest Wood Cup, where he finished 20th.

“I got lucky at a couple events and had a couple things go my way, like a boat draw or getting a couple better bites,” said Lawyer, the 2016 BFL All-American champion who finished 5th at the 2016 Forrest Wood Cup at Wheeler Lake. “Then there were a couple tournaments in which I fished too conservatively. I should’ve done better if I’d fished more naturally instead of just trying to catch five. I should’ve gone a little harder on the cut days in those tournaments.”

His rookie year was certainly a learning experience and the 39-year-old who works as the city administrator in Sarcoxie is itching to get back into Tour competition next year. His sequence of finishes largely resembled a teeter-totter, but now that he knows what to expect, his goal is to become more consistent in his second full season. Consistency, he feels, will lead to fewer ebbs and flows in his confidence.

“It was one big storm of that,” he said. “There were a couple times where I wasn’t comfortable beween missing work, note being at home and, obviously, the financial side. That’s the whole part I struggled with – keeping it all flat-lined. I’m hoping to stay more consistent across the board.

“It’s amazing how much one fish or a lower boat number or you jump off one fish, it just kills you at this level. It’s hard to bounce back from some of that and keep it all straight. In the end, it worked out and it’s gratifying at a lot of levels, especially when you earn a $10,000 check against some of the best in the world doing something you’ve dreamed about your whole life.”

Like other newcomers to the Tour, Lawyer was in the position of having not cast a line at any of the venues on the 2017 schedule. He’d fished at Beaver Lake before, but it was 15 years ago and he was targeting stripers then, so he doesn’t even count it as a bass fishing trip.

For the most part, despite his lack of experience, he felt his decision making was strong throughout the season and he learned plenty along the way. After an 89th-place finish at Lake Guntersville, he rebounded with a season-best 9th-place showing at Lake Travis in Texas.

From there, he took on Florida fishing for the first time and came away in a three-way tie for 53rd – the last place to get a paycheck – with Scott Canterbury and Larry Nixon. After the tie-breaking criteria was applied, Lawyer wound up 55th and outside the money. Still, he saw it as a minor victory.

“I said if I could survive Florida, I thought I’d have a chance to win Rookie of the Year,” he said. “After it was over with and I lost out on the last check, I was driving home and I remember thinking, ‘I’d go back there.’ I’m looking forward to going back. That was my first taste of Florida.”

As it turns out, he’s a big fan of fishing grass, something that’s pretty scarce in the lakes he fishes in Missouri and Oklahoma.

“I remember fishing a BFL regional at Ouachita and it was the first time I’d ever seen grass,” he said. “I loved it because at any minute you got the feeling like you could be around a school of bass. At home, it’s all rocks and wood so every time I get around grass and vegetation, I feel really confident.”

For some Tour newcomers, settling into a multiple-day format can be the ultimate challenge. Knowing how to manage time in practice and when to set the hook is part of the battle. The other part is managing areas and fish once competition begins, especially over the first two days.

Lawyer said there were times he felt like he had it figured out and others when he wished he would’ve fished an area harder for longer.

“I feel like that’s always been to my advantage,” he said when asked if he was still getting used to four-day events. “When the FLW Series were 4 days there were times I’d be outside the cut on day 2, but on day 3 I’d put another limit together where others were struggling. I’m not the type of guy who can catch 20 (pounds) each day, but I can keep pecking away with 12 to 13 pounds.”

At the Potomac River season finale, he caught 14 pounds by 9 a.m. on day 1 and left his best areas alone the rest of the day.

“I figured I’d be in good shape, but I wound up in 73rd,” he said. “I came back and caught 16 on day 2 [and finished 41st]. I learned that you can’t lay off your fish that much. I’m going to work more on looking at the day-2 cut rather than looking ahead. It’s just so hard to manage fish with just two days.”

> Lawyer has dropped 25 pounds since the Cup in August as he is committed to getting into better physical shape to handle the rigors of practice and competition. “Fatigue is something I need to manage more,” he said.