Lawyer Wins From Start to Finish 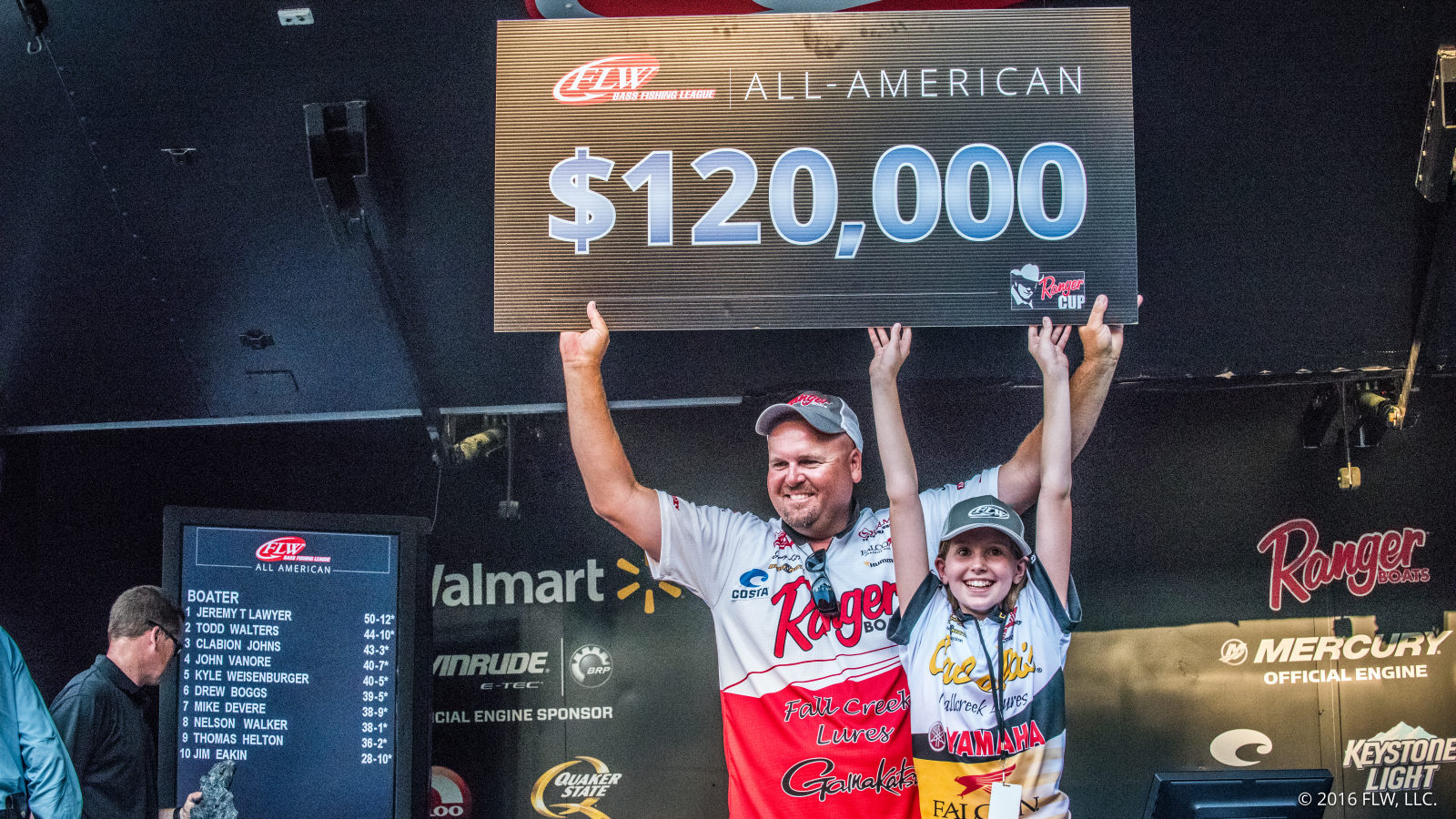 One of the most frustrating moments of Jeremy Lawyer’s life occurred in 2015 when somebody else hoisted the winner’s trophy in the FLW Bass Fishing League All-American as he stood by and watched. It wasn’t that Lawyer begrudged Curtis Richardson for winning by a margin of slightly more than 3 pounds, but that he had come so close only to falter at the end.

Fast-forward to 2016: It’s the same scenario, the same tense moment of truth at the final weigh-in of the All-American, but this time it’s Lawyer’s name that is shouted out at the end, and he’s the one holding the $120,000 check above his head as the crowd roars its approval. Lawyer, who earned a trip to the 2016 Forrest Wood Cup on Wheeler Lake, Aug. 4-7, wound up with a three-day total of 50 pounds, 12 ounces, or a bit more than 6 pounds better than runner-up Todd Walters of Kernersville, N.C.

Call it karma. Lawyer, of Sarcoxie, Mo., led the event on Lake Barkley hosted by Cadiz-Trigg County Tourism from the get-go, and only expanded his lead each day starting on day one. In hindsight, observers could see that Lawyer’s star was on the rise when he turned back a challenge from LBL Division stalwart Drew Boggs in the opening round and took a lead of just over a pound into the next day with 18 pounds, 6 ounces. In the second round, Lawyer put some distance between him and Boggs with a 14-pound, 12-ounce total that gave him 33 pounds, 2 ounces overall to the latter’s 28-13.

On day three, Boggs came in one fish shy of a limit and was overtaken by Walters, whose five fish totaled 17-1. As he had done in the 2015 All-American, tournament master of ceremonies Chris Jones built up the suspense of the moment and invited Walters back to the stage to watch Lawyer’s catch being weighed. It was no contest, as Lawyer toted the day’s heaviest stringer – 17-10 – to the scale.

“If you’d been with me the six days I pre-practiced on Barkley, you’d have thought there was no way for me to win,” says Lawyer, Sarcoxie’s city superintendent. “Heck, on two of those days, I didn’t even catch a bass. But then things just started falling into place when the tournament got going. It was a struggle the whole way, but when I needed something good to happen, it did.”

Saturday morning was a case in point. Lawyer says he left the takeoff at Lake Barkley State Resort Park Marina satisfied that he had fished his best the previous two days, executed perfectly and would have no regrets if he didn’t win the championship. Then, an hour after he started fishing, he caught a bass that weighed more than 5 pounds.

“That big one sort of set the tone for the day,” recalls Lawyer, 38. “I caught another smaller keeper, but then it just shut down. I still had only two keepers around noon, and I got that bad feeling that things weren’t going right and I couldn’t do anything about it except keep fishing and keep doing what I’d been doing. Then I caught a 4-pounder and a 3-pounder at 1 o’clock, and finished with a 4-pounder

Lawyer’s plan of attack called for him fishing a Bandit crankbait (herring pattern) custom-painted by Fall Creek Lures and alternating it with a Zoom Brush Hog (green pumpkin) or Magnum Trick Worm fished on Falcon Cara and Low Rider rods and Quantum reels with Cabela’s fluorocarbon. The Bandit crankbait accounted for a 5-pound, 4-ounce smallmouth on day one. Most of the time, he fished offshore brush piles, stair-stepping ledges or other bottom irregularities in Little River and the larger coves north and south of the Highway 68 bridge in water that ranged from 4 to 12 feet deep. There was one notable exception, however.

“Really, I had this ‘magical tree’ that bailed me out,” he confesses. “I found it in pre-practice in Taylor Bay. I was running out and spotted these green leaves and branches poking out. I don’t know if somebody put it there or it floated in from somewhere. As the lake came on up, it got stuck on the bottom and covered by water. I thought, what the heck, I’ll mark it and try it. The first day, I caught my two biggest fish off of it on back-to-back casts. The second day, I caught my biggest keeper there. Today [Saturday] it ran out of magic. I didn’t catch anything there.”

Fortunately for Lawyer, co-angler John Farmer was able to substitute as his lucky charm. On day two, Lawyer decided to crank the bluff bank on the south side of the mouth of Little River. Farmer, his partner, opted for a shaky head, and within minutes he caught a 3 3/4-pound largemouth. A few minutes later, according to Lawyer, Farmer caught another keeper. Saturday, Lawyer returned to the spot and fished his soft plastics. That’s where he caught his biggest fish of the day, plus two more keepers.

Besides finishing All-American runner-up in 2015, Lawyer placed seventh at Lake Nickajack in 2013 and 18th on the Connecticut River in 2006 in previous All-American events. Not surprisingly, he aspires to a career in fishing.

“I’ve dreamed about it [turning pro] for so long … I would love to do it if everything fell into place,” he notes. “I might do well, and I might get my teeth kicked in, but some day when I’m old and grey I would look back and say, ‘I did that.’ You bet I’d like to be a pro.”