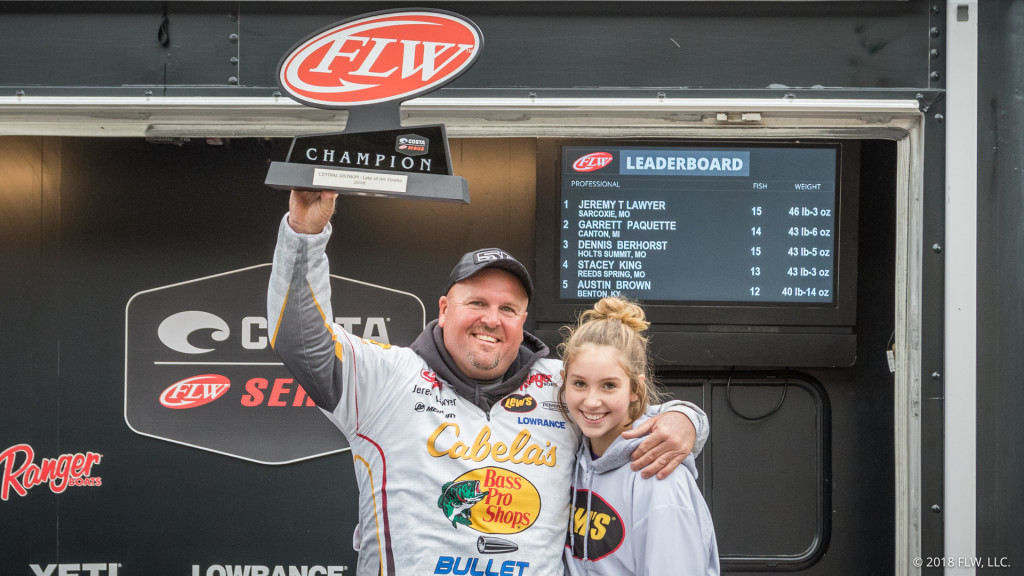 OSAGE BEACH, Mo. – FLW Tour pro Jeremy Lawyer of Sarcoxie, Missouri, brought a five-bass limit weighing 13 pounds, 12 ounces, to the scale Saturday to win the Costa FLW Series Central Division finale on Lake of the Ozarks. Lawyer’s three-day total of 15 bass totaling 46 pounds, 3 ounces, was enough to earn the win by a 3-pound, 3-ounce margin and the top prize of $88,500, including a brand new Ranger Z518C boat with a 200-horsepower Mercury outboard.

“I spent the first two days of the tournament fishing between the Toll Bridge and the Gravois Arm,” said Lawyer, who earned his first career victory on Lake of the Ozarks after 10 prior top-10 finishes on the lake in FLW competition. “I tried to not fish any waypoints or history and just rely on my fishing instinct. If there’s one thing on the Tour that I have learned that has really helped me, it’s visiting a bunch of new lakes and not having waypoints. I feel more confident and comfortable fishing like that, and that is something that I really tried to do this week.

“I started out on the same stretch this morning and ran back into some creeks that I hadn’t been to yet,” Lawyer continued. “I had a limit in the first 45 to 50 minutes – including a 4½-pounder – and that settled me down a bit. I pulled the plug around 10:30 and went to the Hurricane Deck area and ended up culling up three more times.”

Lawyer credited a Zoom Magnum Trick worm and a Freedom Tackle Swing Buzz buzzbait as being his key baits throughout the week that, “helped me get five each day.” Saturday he caught one good one on the Magnum Trick worm and the rest came on a River2Sea Whopper Plopper, custom-painted by Fall Creek Lures.

“They’ve got a color – midnight shad – that I’ve got a lot of confidence in,” Lawyer said. “I also threw the original bone color this week as well.

“So many guys had the opportunity to do well this week with that Plopper and they just lost them,” Lawyer continued. “I was fortunate enough to not lose them when they bit. I really credit my Lew’s Heavy Cover Carbon Pro rod for that. It’s a heavy-duty rod, but still parabolic. It takes a little bit of the shock out of them when you initially set the hook.”

Lawyer bested a stacked final-day field that included some of the top Lake of the Ozarks anglers of all-time. He was extremely humbled and proud of his accomplishment Saturday.

“I still can’t believe it happened for me today,” he went on to say. “I grew up watching Stacey (King) fishing on television and he has been the man here for many years. Dennis Berhorst wins everything. I told my wife back when I started that if I could compete with Dennis, Roger (Fitzpatrick) and Marcus Sykora that I could survive anywhere. And that was back in 2005. I have so much respect for all of those guys. It feels good to be on top this week, but next week I’m sure one of those guys will be on top again.”